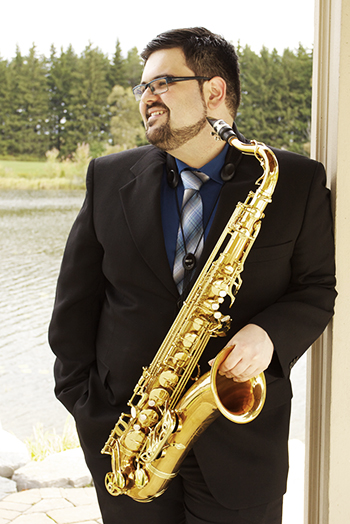 Toronto Born musician Lorenzo Polese, is a saxophonist and educator based in Toronto, Ontario. Lorenzo’s formal education started at York University where he received his Bachelors of Fine Arts, specialized honours in music, in 2015. In his final year, Lorenzo was selected as one of the few participants in Ontario for Jazz FM 91’s Jazzology program.

Lorenzo’s musical journey began playing in the Concert Band at Robert F. Hall Secondary School in Caledon, Ontario. Coming together in a community to create beautiful music soon became an inspiring and wonderful feeling that was hard to ignore. He quickly excelled at all exercises and challenges his high school offered in music. He moved across the country in his final year of high school, graduating from Robert Bateman Secondary in Abbotsford, British Columbia. There, Lorenzo was presented with the Robert Bateman Musicians Award for excellence in music. After leaving high school, he knew that he wanted to make a living creating music with like-minded individuals and felt that Toronto's vibrant musical community was the best place to start.

Lorenzo has been studying Jazz under the tutelage of world class musicians since his acceptance at York University in Toronto. Lorenzo has played in ensembles of various genres, such as: Pop, Rhythm and Blues, Hip-hop, Bollywood, Latin, Jazz and Classical. While also teaching music privately, he has worked at public teaching facilities such as The National Music Camp of Canada and 3G Music Studios. Lorenzo has studied with many great instructors including: Sundar Viswanathan, Ryan Oliver, Nick Morgan, Carlos Amaran, Ken Meyer, Tara Davidson, and Kelly Jefferson. He has also studied with trumpet players Mike Malone and Kevin Turcotte, bassist Artie Roth and pianist Mark Eisenman.

In February 2013, Lorenzo started his own quintet "Glass Act." This group features Toronto’s own: Christina Wynans (Vocals), Greg McClary (Piano), Daniel Diaz (Bass), and Justin McHugh (Drums). Working with vocalists has always been an interest for Lorenzo, which is why working with Toronto artist Natasha Roldan was such a pleasure. Lorenzo guested on Natasha’s newly released EP “No Apologies” (2015). Lorenzo can also be seen playing with his Quintet or his duo/trio projects. Lorenzo currently teaches and plays in Toronto, Canada.

Other groups Lorenzo is affiliated with: